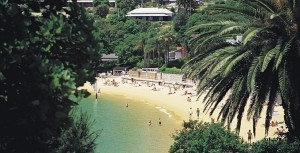 Watsons Bay takes its name from Robert Watson who served on HMS Sirius when it arrived in Sydney in 1788. By 1811, Watson had been appointed Sydney’s harbour pilot and harbour master, and by 1816, the first Superintendent of South Head’s Macquarie Lighthouse, designed by Francis Greenway

Until the 1950’s, Watsons Bay was very much a fishing village, but in recent decades its sublime views of the Harbour and ocean, combined with its proximity to the CBD has seen it change into a chic residential suburb.

Many of the small fisherman’s cottages built from stone and timber still survive. Beside them are some of the more substantial brick homes dating from the 1950’s and a smattering of sleek contemporary houses.

The village shopping centre will cater for your basic needs, but when more serious shopping for food, wine and fashion is imperative, then head off to nearby Rose Bay, Double Bay or the malls of Bondi Junction.

Take a brisk walk or jog around the headlands, a plunge in the harbour, or contemplate both over a glass of wine in the beer garden. The dedicated can head off to the gyms in Bondi Junction or try the hardest part of the City to Surf run as you pound up New South Head Road.

Watsons Bay is 11 kilometres north east of the CBD. Plenty of buses run from the suburb, to either the Bondi Junction rail-head or the CBD. There is a regular ferry service from the public wharf.

On South Head is the Greenway designed Macquarie Light that was significantly altered late in the 1800’s by the equally famous architect, John Barnet. Closer to the Harbour is the Watsons Bay Hotel and its indolent beer garden, and down on the waterfront is the world famous Doyles seafood restaurant.

The Doyle Family and their restaurant and fish business have been the public face of Watsons Bay for decades.

Watsons Bay has a couple of cafes that are perfect for a civilised coffee and a light snack. The Watsons Bay Hotel (or the Watto Bay as the locals, and would-be locals, call it ) has a great beer garden with cold beer, good food and wine, and a view up the harbour that makes your glad you’re alive. However, it’s time to again mention Doyles. The family has a takeaway on the wharf where you can get your fish and chips and head off to the park. Or for more serious dining, grab a table at the restaurant, eat the best fish and chips in Sydney, and contemplate a view of the city skyline and harbour that turns the world green.

Sydney’s best private schools are close at hand, with Kambala, Ascham, Cranbrook and Scots only a short drive, and great state schools at Dover Heights, Bondi and Rose Bay.