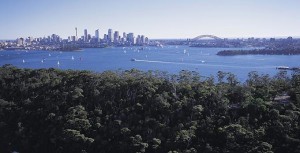 With Sydney Harbour as its northern boundary, and the Pacific Ocean to the east, Vaucluse is sublimely sited for luxurious living. Its earliest residents were the pioneering Wentworth family who built the family home, Vaucluse House is still in the crook of a valley encircled by Olola Avenue. Since the early part of the 20th century, Vaucluse has been home to Sydney’s affluent either in their waterfront mansions or on large hillside tracts with magnificent views.

For around $500,000 you can find yourself a respectable old style apartment, but there are few. Most of the houses of Vaucluse are grand houses of varying periods and styles. Even the California bungalows are substantial when compared to those of other suburbs. Those in need of a waterfront should open the bidding at around $20M for slice of the world’s most desirable property.

On the crest of the hill is a village shopping centre catering to all the basic needs. The extensive shopping of Rose Bay, Double Bay and Bondi Junction are only a short drive.

Neilsen Park and Parsley Bay are safe harbour swimming enclaves. For runners and walkers, then Neilsen Park and its adjoining bush paths will take on a tour of some of Sydney’s most spellbinding views.

Distance from the CBD and Transportation

Vaucluse is 9km due east of the CBD and is well served by buses, or trains from Edgecliff, a ten minute drive.

The sometimes precarious entry to Sydney Harbour is made safer by the Macquarie Lighthouse on Vaucluse’s eastern border. Closer to the harbour is Vaucluse House, stately Strickland House and the green expanse of Neilsen Park with its Federation kiosk.

Some of Australia’s leading corporate personalities enjoy a quiet and discreet family life within Vaucluse’s border.

In the shopping village there are a few small takeaways, but take a wander down to the grounds of Vaucluse House and you’ll find the tea rooms with a civilised menu of modern Australian food and wine. In nearby Watson’s Bay is Dunbar House, Doyles and other interesting local restaurants and cafes.

On the hill above the harbour is Kincoppel High School, Rose Bay, and within a few minutes drive are Ascham, Kambala, Cranbrook, and Scots College. Vaucluse is made of up two municipalities; Woollahra Municipal Council & Waverley Council.