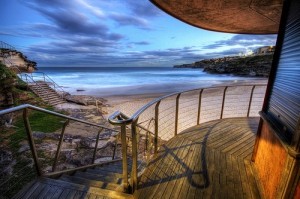 You may find it hard to believe now, but in the late nineteenth century, Tamarama was home to an aquarium. Inside the aquarium was a shooting gallery, a dance hall and an ice-skating rink. In 1906, Wonderland City, which was modelled on Coney Island, replaced the aquarium. By 1911, it had also closed and the surf culture took over. Often tagged ‘Glamarama’, this little beach tucked between Bondi and Bronte is frequented by the beautiful people. The surf here is often unpredictable, but that doesn’t stop the crowds flocking here in summer.

Tamarama is an interesting mix of older-style, sun-drenched apartments and contemporary houses with an emphasis on outdoor living. Whatever your choice, you’ll more than likely enjoy sensational views across the ocean and be just a moment’s walk to the beach.

Back down to Bondi, and you can choose organic fruit and vegetables, walk into the butcher shop to get supplies for tonight’s barbecue,

The Tamarama beach kiosk is one of the best, serving good coffee, banana porridge, focaccia and a bit of attitude.

Head for Bondi Road and you’ll be able to eat your way around the world from Thai, Italian and Greek to Jewish and European. Or you could grab a hamburger from Burgerman, a pizza from Mozzarella, fish and chips from The One That Got Away or a Portuguese chicken from Oporto and head to Bondi Beach.

Down the road at Bondi Beach, you can enjoy chic food with a view at Hugo’s, Sean’s Panorama, Fu Manchu, Raw Bar, Jones and the ever-popular Lamrock. Or grab a morning coffee at Speedo’s, Aqua Bar or Aroma to Go.

In the other direction, you can pull up a chair at any one of the cafés along Bronte Road. Bronte Bite, Sejuiced or Memento serve up good, café nosh or there’s fish and chips from the famous Bronte Chippa.

The clifftop Tamarama Surf Lifesaving Club. The coastal walk from Bondi to Bronte is one of the most popular walks in the eastern suburbs.

The film, fashion and music worlds in the guise of Megan Gale, Debra Hutton, Dare

Tired of the beach? Behind the beach is a grassy picnic area and playground, a big enough area to kick a ball. Or, of course, there’s also the walk or run to Bondi or Bronte via the headland footpath. Bronte Park has a modern playground, room to throw a frisbee and the very popular chuffing train for kids and kids-at-heart.

Tamarama is approximately 7km from the CBD by road. Its well served by public transport with buses to Bondi Junction and connections to the city by bus or rail. There are also buses to Bondi and North Bondi.