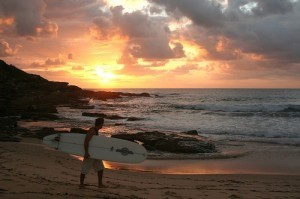 Maroubra is the Aboriginal word for “like thunder “ and draws its inspiration from the sound of the waves pounding the beach and rocks that mark the suburb’s eastern boundary. Until the late 1870’s Maroubra was still very much untouched by the city developing around it, but with the arrival of wool scouring works on the bay, the area slowly began to develop.

It remained reasonably obscure until 6 May 1898, when, in a furious storm, the 1893 ton Hereward ran aground on the northern end of the beach. The disaster drew crowds from all over Sydney. Attempts to re-float it were briefly successful, but the ship broke its tow line and was driven onto the rocks were it remained.

After World War I the developers moved into a subdivided the area, and with the arrival of trams in 1921, Maroubra boomed. These days it is a pleasant middle class suburb with a busy commercial heart.

With its rapid development in the 1920’s the classic California bungalows and solid brick homes are the most common buildings in the area. The 1960’s and 70’s saw the development of home units across the suburb, mixed with some substantial houses on the bluffs above the ocean.

Down on the beachfront is enough food to keep you happy during a long Summer day. Back up on Anzac Parade is a busy shopping and commercial centre with supermarkets, departments stores and specialty retail.

And then there’s the beach. Maroubra has a safe swimming beach with great surf, and of course an expanse of white sand to jog along. The area also has gyms for the serious pumpers of iron, and tennis courts and ovals.

Maroubra is 10 km south of the city and there are frequent and rapid buses.

The most famous local landmark is the magnificent white sand beach in the shape of horseshoe.

Maroubra is well stocked with local hotels and clubs that serve nice food. Along Anzac Parade and the beachfront you’ll find hamburgers, fish and chips, and casual dining. A short drive to Kingsford puts you at the doorstep of some of Sydney’s great Indonesian and Malay restaurants.

With its development as family area, there are plenty of state schools and church operated schools. In adjacent Kingsford is the University of New South Wales.