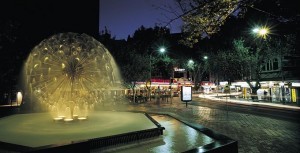 First named Queens Cross in the 1860s in honour of Queen Victoria’s Diamond Jubilee, it was renamed Kings Cross in 1905 to avoid confusion with Queens Square at the top end of King Street in the city.

Kings Cross, or The Cross as it is affectionately known by those who live there, sits on a sandstone ridge between Woolloomooloo and Elizabeth and Rushcutters bays. Geographically, the area is bounded by Darlinghurst and Bayswater roads and the El Alamein Fountain. But what differentiates the locality from other nearby suburbs is that Kings Cross has long represented a bohemian, cosmopolitan, even exotic lifestyle.

With its congregations of foreigners, gamblers, strippers, homosexuals, prostitutes, night clubs and bars, the Cross has long attracted suburbanites for a look.

From the 1920s onwards, the Cross was a traditional centre for migrants, in particular continental Europeans, and was known as ‘Europe in Australia’ – the shops were open late at night, the cafes were crowded and the streets were busy.

During the war years, the area flourished when US and British forces visited. In the 1940s, many artists – including Donald Friend, John Olsen and William Dobell – were attracted to the area’s nightlife.

In the 1950s and ‘60s, a building boom to make the area one of the most densely populated in Australia quickened. Gracious old homes made way for high-rise and theatres and cinemas were replaced by retail businesses, many of them strip clubs and nightclubs.

US servicemen on leave visited the area in the late 1960s. Today’s dreary parade of seedy strip clubs and massage parlours – frequented mostly by suburbanites and outof- towners – is evidence of the way they got their kicks. The trade in sex and drugs is still very much a part of life in the Cross and in many ways adds ambience to its colourful street life.

The most recent temporary visitors to the area are the backpackers, attracted by an abundance of hostels, Internet cafés and cheap restaurants.

The Cross is unique in Sydney for it layering of residential and commercial life and the mostly harmonious existence of tourists; the flotsam and jetsam of city living; and ordinary folk who’ve always lived ‘up the Cross’.

Cheek-to-cheek with the vivid street life, there are glimpses of the Cross’s cosmopolitan and bohemian years. There are quiet enclaves and tree-lined streets with fine examples of Victorian and Art Deco architecture. There’s an attractive collection of apartments, dating from the 1930s to the present day.

Good restaurants abound in Victoria and Macleay streets and Challis Avenue. One of the long-stayers on Sydney’s fickle food front is the Bayswater Brasserie, on Bayswater Road. Some evenings it resembles a Parisian bistro; others it’s a fast, noisy and very Sydney restaurant. Then there’s the equally enduring Macleay Street Bistro, which maintains the feeling of a neighbourhood diner with a constantly changing menu. For those passionate about Italian food, head for Mezzaluna on Victoria Street with serious, smart Italian dishes or Osteria Moana on Macleay Street on the old site of Christine Manfield’s Paramount. This is rustic Italian food at its simplest and best, served up under bright lights and shoulder-to-shoulder with Sydney’s hippest.

Victoria Street is also home to comfy, good value cafés with a happy mix of kids, locals, backpackers and celebrities including Roy’s Famous. Macleay Street also offers the chic, bright Zinc open for breakfast and lunch, serving up the kind of food you want to get up early for – blood orange juices, ham and gruyere sandwiches and pancakes with poached pear and creme fraiche. If you just crave a crisp pizza, then you can’t go past The Pig and Olive, with a duck liver crostini and a rocket parmesan salad on the side. On Challis Avenue you’ll find a couple of haunts where the wait is long, but the food is worth it. You’ll be welcomed as a regular and become comfortable sitting on a milk crate at Spring while you tuck into a legendary BLT or a breakfast plate anytime of day. Make sure you arrive early for pastries and coffee at the cosy La Buvette.

And for Neil Perry’s trademark Asian food, XO is in the neighbourhood, the latest incarnation at 155 Victoria Street. A smart crowd, smooth staff, and clever food.

Sip and be seen at the very trendy Hugo’s Lounge where what you drink is almost as important as what you wear.

Across William Street in nearby Darlinghurst there’s a string of smart bars, cafés and restaurants.

Who could think of Kings Cross without mentioning the blinking neon Coke sign that welcomes you to the area? Right on the ‘Strip’ in Kings Cross you’ll find the famous Bourbon & Beefsteak Bar, another legacy of visiting servicemen. By night, the Bourbon & Beefsteak attracts a curious mix of gawking tourists and workers in the local industries. In the morning, it offers a good ‘recovery’ breakfast.

In nearby Elizabeth Bay, you’ll find the Greek revival villa, Elizabeth Bay House, designed by John Verge and completed in 1838. It was Sydney’s most prestigious house until the construction of Government House. Alexander Macleay, colonial secretary of New South Wales, was the first owner. Originally set in a 22-hectare garden, long gone to property developers, the house still commands splendid views over Elizabeth Bay and the harbour.

Down the road a little is Boomerang, a 1930s Alhambresque fantasy that has been home to some of Sydney’s high fliers.

Or you can catch a bus to the CBD to stock up on gourmet goodies from David Jones’ Food Hall. Edgecliff Shopping Centre is also convenient.

A little further afield is Bondi Junction, the commercial centre of the Eastern Suburbs with Westfield Plaza and the Carousel Shopping Centre as well as boutique clothing shops, David Jones and Grace Bros. K-Mart, Coles and Woolworths are also close by.

Although it’s a densely populated urban space, there are pockets of parkland dotted throughout the Cross, including Fitzroy Gardens, Womerah Gardens and Lawrence Hargraves Reserve. In nearby Elizabeth Bay, there’s the waterfront Beare Park and Macleay Reserve.

Kings Cross may be the home of the ‘massage’ but in the Capital Hotel on Darlinghurst Road, it really is just that. You can relax in a traditional Korean bathhouse with gender-segregated bathing, skin scrub, body massages, wet and dry saunas.

Kings Cross is well-connected to the CBD by public transport including trains from Kings Cross station and frequent buses. It’s approximately 2.5km by road to the CBD.