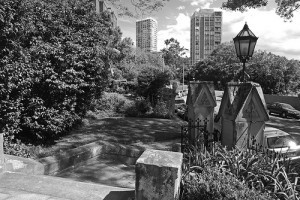 Edgecliff is part of the Woollahra Municipality, which was proclaimed in 1860. Early inhabitants of the area were the Eora, a grouping of Aboriginal people who inhabited the southern shore of Port Jackson. The Eora consisted of a number of bands or clans such as the Cadigal and Birribirragal.

The Edgecliff Centre, features a range of supermarkets, fruit and vegetable and specialty stores. The area is just minutes from Double Bay which has a vast array of fashion and homewar e stores, art galleries, supermarkets, delicatessens, pastry shops etc. And nearby is the main shopping hub of Bondi Junction, where major department stores are located. Also worth checking out are the many fashion and homeware stores along Oxford Street, Paddington, in addition to the Paddington Markets held on Saturdays.

The suburb is close to a plethora of sporting and recreational facilities. Edgecliff is just minutes from the Eastern Suburb beaches including Bondi, Bronte, Tamarama, Clovelly and Coogee. Also nearby is Centennial Park, which boasts horse riding, bike riding, jogging/walking/rollerblading tracks, picnic and barbecue areas, sporting fields, cafés and restaurants, Moore Park golf course and driving range. Other golf courses close by include Royal Sydney and the Woollahra Golf Club.

For movie lovers, there is the Double Bay Twin Cinema, and Chauvel and Verona cinemas in Paddington.

The area also has many recreation areas, including the harbour-front Nielsen Park at Vaucluse, Redleaf Pool at Double Bay, Blackburn Gardens in Woollahra and Cooper Park in Double Bay, which features tennis courts, cricket pitches, barbecue and picnic facilities and bushwalking trails.

Edgecliff is less than 3km from the Sydney CBD and is well serviced by trains and buses. Edgecliff boasts a railway station which is on the Bondi Junction line, with trains traveling to the city. In addition, bus route 325 travels to Wynyard.

There are a range of historical landmarks around Edgecliff, including ‘Emma Chisett’, a sign on a weatherboard wedge-shaped house on the corner of Cameron and Thorne Streets which once houses a corner shop going back to the 1860’s. Legend has it that the name is a strine variant of the request ‘How much is it?’

On Edgecliff Road, there are two heritage homes, ‘Fairlight’, a Victorian Regency house built in 1855 by Mr Joseph William Cocks, and ‘Fernbank, which was built in 1884 by Freeman, a well known Sydney photographer. Miss Louisa JaneGumey established a school in Fernbank, which was subsequently moved to Kambala in Bellevue Hill, from which the present Rose Bay Girl’s School took its name. The house was one of a couple of identical Rustic Gothic houses, the eastern one remaining mostly unchanged while Fernbank was vastly altered.

Other landmarks include the wrought iron gates at Cranbrook School and St Mark’s Church, Darling Point, which came from the Joyner’s Blacksmithing Shop in Edgecliff, which was operated by members of the Joyner family from 1858 to 1980.

Edgecliff is surrounded by suburbs such as Double Bay, Paddington and Darling Point, which boast a huge range of exciting restaurants and cafes. In Edgecliff itself, restaurants include La Bella Casa Pizzeria, Flavour of India and Allegro. Popular eateries nearby include Bistro Lulu in Paddington, Bistro Moncur in Woollahra, Catalina in Rose Bay, the Blue Oyster in Double Bay, and Pruniers in Woollahra.