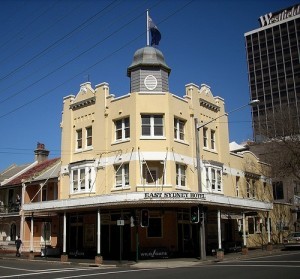 As the young colony began to spread, the fertile valley that is East Sydney was dedicated to market gardens.

These gardens soon gave way to rows of workers’ terrace houses and light industrial buildings. By 1849, the Australian Museum had been built on the corner of William and College, and William Street. Sydney Grammar School soon followed in 1857 on the site of the old Sydney College that had been built in 1835.

These days many of the terraces remain, either awaiting renovation, or as superbly renovated inner city residences. Many of the old industrial buildings have either been converted into apartments, or torn down to make way for new office buildings.

William Street is a blend of high and low-rise commercial buildings. In the streets behind, are terrace houses from the tiny worker’s cottages to more substantial properties. The condition of these properties is as varied as their sizes. Apartments range from tiny studios to opulent art deco and sleek contemporary designs

A couple of local convenience stores and delis keep the locals in basics. There are supermarkets both at Kings Cross and on Oxford Street. East Sydney is close to some of Sydney’s best fashion and furnishing stores in Oxford Street, Bourke Street, the CBD and dotted around Surry Hills.

On the western boundary is the Governor Phillip Park pool and gym complex, and down in Crown Street is world famous city gym (yes that is a picture of Arnie chatting with the owner, and Sam Neill on the exercise bike). But when the seabreeze is blowing, take to the streets for walk or jog around the laneways and down to the harbour.

East Sydney is the eastern border of the CBD. If you don’t feel like a stroll through Hyde Park, take one of the numerous buses passing along William, Oxford or Stanley Streets.

The Australian Museum and Sydney Grammar School dominate the western boundary of East Sydney. Cutting through the middle of East Sydney is Stanley Street, better known as ‘Little Italy’ because of its numerous Italian coffee shops and restaurants. The eastern boundary is dominated by Harry Siedler’s controversial apartment building, the Horizon.

Look no further than the tenant list of the Horizon if you’re in search of Sydney’s rich and famous.

Stanley Street is all Italian – starting with coffee or a cheap bowl of pasta at No Names or Bill and Tony’s, and wandering up market to restaurants like Liago, Tre Scalini and the Edge where the city’s more discreet deals are done. On Crown Street, you’ll find Japanese food, the famous Phat Boys Thai, or watch the Labor Party chew rare meat at Kelly’s Steakhouse.

Sydney Grammar and SCEGGS are the two dominant educational forces in East Sydney. A short drive away is Sydney High School, Darlinghurst Primary and Plunkett Street.