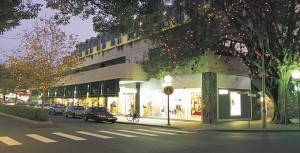 Originally called ‘Keltie Bay’ after the master of the First Fleet vessel HMS ‘Sirius’, the suburb’s current name evolved because of the pair of bays on its northern harbour foreshore. Governor Macquarie originally bought 20 acres for development as a Botanic Garden, but the garden never eventuated.

The 1920’s and 30’s were the growth years for Double Bay when the bulk of its stylish apartments and elegant bungalows were built. When the ‘swinging 60’s’ arrived, Double Bay was ready. It swiftly developed into Sydney’s most fashionable shopping precinct, and this reputation still remains. These days Double Bay’s glamour remains untarnished with its superb shopping, lovely food and elegant accommodation.

Double Bay is an eclectic mix of architecture and design. Due to the influence of different cultures and the wealth of the demographic, the architecture has always been considered cutting edge.

Double Bay is the fashion capital of the city, with its emphasis firmly on designer boutiques and high fashion labels. There is a fine selection of specialist book stores, antique shops, art galleries, and fine food. Add the flavour of its many European residents, and you could be forgiven for thinking you’re somewhere in the south of France.

At Redleaf Pool you can stretch out in the sun between laps, or try the gyms in the village. On the waterfront is the Double Bay Sailing Club, and the CYC is close by. Runners and walkers can burn their calories around Double Bay Park or in the hillier sections near Darling Point. If that’s not enough, then there’s Cooper Park with football, cricket and tennis facilities.

Double Bay is 4.5 kilometres from the CBD, with frequent buses along New South Head Road to the city. Edgecliff Station with its fast service to the city is only a short walk, but why not take in some fresh sea air on the 15 minute ferry ride to Circular Quay.

Double Bay’s Post Office serves as a gateway landmark for one of Sydney’s most unique commercial centres. One of the finest luxury deluxe Sydney hotels, Stamford Plaza Double Bay is known for its style and elegance, and contains a gallery of fine art with 18th century paintings and Georgian antiques. This prestigious hotel is host to American presidents, European royalty and entertainment celebrities. On New South Head Road you’ll find the picturesque Redleaf Pool with its sand, shade and pontoons, and just along the water’s edge, Seven Shillings Beach.

In between shopping for fashion and trading the latest intrigues, you might find time to eat. Knox Street is full of casual dining that will take you from breakfast through to late supper including the ever popular Dee Bees. Pink Salt, Limoncello and Georges offer fine dining, and for casual evenings at home, there are plenty of gourmet providores.

Double Bay Public School is the only school in the suburb, but a short drive away are the prestigious Cranbrook, Scots College, Kincoppal, Ascham, S.C.E.G.G.S, St Vincent’s, Sydney Boys/Girls High, Waverley College and Sydney Grammar.