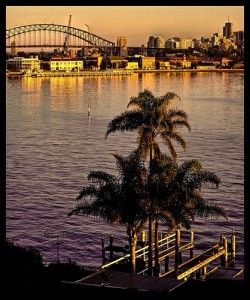 Darling Point, originally named Mrs Darling’s Point after the wife of the then Governor,traces its genteel and distinguished origins back to the 1830’s when the road east from the city, New South Head Road, was completed. The first buildings were not the worker’s cottages normally associated with inner city development, but the grand homes of Sydney’s society leaders.

Whilst many survive today, equally as many departed since the World War 2, makingway for the elegant apartment buildings with the jaw dropping views of the harbour that forms the suburb’s northern, western and eastern boundaries.

Though only a few minutes from the city, Darling Point maintains the quiet elegance of its past.

With the exception of a tiny local shopping centre, Darling Point is dedicated to elegant residences. Some of its original mansions and grand terraces remain, all lovingly maintained. Mingling with the amongst the mature trees and shrubs, are large apartment buildings that have arisen since the end of World War 2, and elegant contemporary duplex and townhouse developments.

The tiny local store will keep you in papers, milk and croissants. A short walk along the tree lined streets will see you amongst the boutiques and food stores of Double Bay, or the supermarkets of and specialty shops of the Edgecliff Centre.

A run or brisk walk around the quiet streets of Darling Point will work wonders for both mind and body. The women only “Temple of Body and Soul”, and Regenesis Gym are nearby, as are the tennis courts of White City.

Darling Point is only 3km east of the CBD. At its southern border is the Edgecliff train station, and New South Head Road with its ample buses. The 327 bus through Darling Point to the city, and a regular ferry service from McKell Park to Circular Quay.

On the western harbour foreshore is Olympic sailing headquarters and base for the Sydney to Hobart race, the Cruising Yacht Club of Australia.

Upon the crest of hill is the “Swifts” formerly the home of the Resch’s brewing dynasty, and on the rare occasions it changes owner, usually Australia’s most expensive non water front house. Moving down the harbour front is the peaceful McKell Park, home to picnickers and lovers for over a century, overlooked by the National Trust’s Lindesay, and that masterpiece of Sydney art deco style, Craigend.

The best kept secret, and for that matter, the only restaurant in Darling Point is at the Cruising Yacht Club. It’s an informal spot on overlooking the marina and city skyline, and ideal for a glass of wine and a light graze. Of course, a short drive takes you to Double Bay, Woollahra, Paddington or Potts Point and some of Sydney’s best dining and cafes.

St Marks Kindergarten and Ascham are within the suburb, with Sydney Girls and Boys High, Kambala, St Vincents, S.C.E.G.G.S, Scots College, Cranbook, Sydney Grammar and Waverley College only a brief drive. Darling Point is only 3km east of the CBD. At its southern border is the Edgecliff train station, and New South Head Road with its ample buses. The 327 bus through Darling Point to the city, and a regular ferry service from McKell Park to Circular Quay.