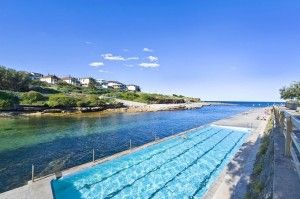 The beach suburb of Clovelly was once known as Little Coogee to the first white settlers because of its proximity to the more famous seaside resort at Coogee, which was then called Big Coogee. Due to the efforts of a local progress association in 1912, the name was changed to Clovelly after the fishing village in Devon.

The first white settlers were drawn to Clovelly’s natural features and visited the area to fish and hunt. A permanent settlement evolved mostly from two large land grants in the 1830′s, one to James Holmes and the other to William Charles Greville, a clerk in the Colonial Secretary’s office. Mr Greville bought 20 acres of beach front property for 40 pounds in 1834 and built a residence near the stream on the north side of the Clovelly Bay. In 1850 Greville Street was named after him. Greville’s 20 acres was resold in 1853 to Dr John Dixon who built a mansion called Rockbrook and created elaborate gardens in the grounds.

In 1909 the area underwent massive subdivision into residential blocks which form the basis of the suburb of Clovelly today. The arrival of a tram service in 1913 helped make Clovelly a popular residential and tourist area.

There is an array of restaurants and cafes, many of which are near the beautiful beach. Local favourites include Jane’s Thai Café, Big Frank’s Pizzeria, Oceanic Chinese Restaurant, Pinto Thong Thai, Seasalt Café & Kiosk and Specc Café Restaurant. The Clovelly Hotel is also a well frequented place. Nearby Randwick also has a large range of eateries to choose from.

In the immediate suburb there is the Clovelly Childcare Centre, Clovelly Public School and St. Anthony’s School. Nearby Randwick has Randwick Girls’ High and Randwick Boys’ High. The University of NSW is also just a few minutes away.

The Clovelly Hotel is a popular icon and well frequented during the warmer months. Clovelly and Gordon’s Bays are well known among the scuba diving fraternity because of the crystal clear waters and exotic fish.

Clovelly has a range of neighbourhood stores for all your needs – groceries, fruit and vegetable, florist, newsagents, chemists, liquor stores etc. It is also just minutes from Royal Randwick Centre and the well-known shopping hub of Bondi Junction, which features major department stores, supermarkets and specialty stores.

Clovelly has a sheltered beach which is safe for children and very popular with families and surfers. It features a good ocean pool for swimming and snorkeling. Clovelly Bay and Gordon’s Bay are scuba diving hotspots, featuring an underwater trail.

Clovelly also links up to the 6km Bondi to Coogee Coastal Walk, which is popular with fitness fanatics and people who just enjoy a great walk with beautiful views. Nearby are five golf courses – St. Michael’s, The Coast, The New South Wales, The Australian and Randwick.

Also nearby is Randwick Racecourse and Centennial Park, which features jogging/walking/cycling/roller blade tracks, horseriding, playing fields and many picnic spots.

Clovelly is just 7km from the Sydney CBD. Bus numbers 353 & 360 travels to the Bondi Junction Interchange, while the 339 travels from Clovelly to Wynyard and Millers Point.