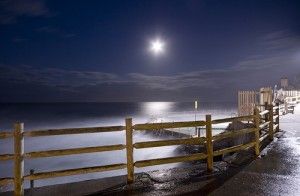 Bronte was recently voted the best of 641 Sydney suburbs by the Herald’s 2008 Good Suburbs Guide. The guide’s editor, Stephen Nicholls, said only Bronte had the full package. “It’s got a great beach, great cafes, a great primary school and [it’s] so close to the city. Where else in the world can you have a suburb with so much going for it?”

Bronte can be found on coast just east of central Sydney. Its original name was Nelson Bay, after the Admiral. By 1836 the first land grants had occurred and the foundations for the great Bronte House had been laid. The coastline is a dedicated nature reserve, and the surf is one of the safest and finest on the southern side of Sydney harbour.

On the top of the hill above the beach is a small local shopping centre, where you can find all your domestic essentials from the newspapers to patisserie.

Bronte is positioned amongst the magnificent runner’s pathway along the cliffs through Tamarama to Bondi. Along the way you’ll find exercise stations to work on the bits that running doesn’t cover. Finish your run with a dive into the surf.

For the cyclist, there are plenty of hills to get the heart rate up, and Centennial Park is only 10 minutes pedalling.

Bronte is 7km east of the CBD, with plenty of buses direct to the city or the 378 along MacPherson Street to Bondi Junction and its fast train service to the city.

Bronte is a typical Sydney beachside residential suburb. The local styles from semi detached houses dating from the earlier part of this century, the California bungalows from between the wars, through to substantial houses and contemporary apartments. The goal for which they all strive is find their own glimpse of that magnificent ocean view.

Bronte does breakfast and lunch beautifully. Along the beachfront is strip of cafes that will keep you well fed. At night join the locals at the RSL, or take a quick drive to Coogee or Randwick to another excellent range of friendly local restaurants.

Bronte and Clovelly Public schools are located in the suburb, with numerous State and Church schools in nearby suburbs. St Catherine’s, Australia’s oldest girl’s school can also be found here.